Thank you to everyone who helped make this event a another success and to those who donated prizes. Everyone had a good time even those who did not win a prize.

District 98 staff would like to thank Eastern Territory Education Representative Donna Perinetti –  her expertise, knowledge, wisdom and input provided much appreciated education to all that attended. Sister Perinetti is truly an asset. The staff would also like to thank everyone for attending, and Local Lodge 1842 for the use of their Hall.

Lord Corporation which is a Global recognized company that manufactures Aerospace , for the military and commercial industry, electrical, and mechanical . Lord is the second largest employer in Erie.

The Erie facility is the largest employer and only union shop of Lord Corp, that is represented By Timothy P. Buck Assistant Directing Business Representative of District 98.

The company contacted the union representatives in September of 2011 that the 90,000. Square foot facility that has been in Erie for 70 plus years is not large enough to continue there .

The company requested to meet and negotiate economics and an extension of the current agreement as a commitment from the union for stability while they were looking to achieve a one million square foot facility in Erie.

This would be a committed investment from the company of investing sixty to one hundred million dollars. In purchase, renovations and upgrading machinery at a new facility which was a previous manufacturing site in Summit township.

There were many local politicians and state wide politicians that were involved, up to the governor’s office that supported the retention of these jobs in Pennsylvania, as well as company CEOs from Lord .

The skilled memberships from the locals surely were a key factor in retaining the facility. Which according to the company will grow with the possibility of 100 additional jobs.

Health care improvements while no increase on the memberships agreement percentage

A $4.00 Increases in the pension multiplier

Increase of ½ day personal day. to 3 ½ days each year

The locals’ negotiating teams were instrumental in securing the ratified agreements for their memberships.

Further proof it pays to belong!

The grievance committee of Local Lodge 2171 and District Lodge 98 Business Representative Robert Miller settled a grievance on behalf of Barry Hostetler a member L.L. 2171. Mr. Hostetler had been unjustly suspended from his job by his employer Lockheed Martin Aeroparts, Inc. in Johnstown Pa. on October 6th, 2009.

The settlement called for Mr. Hostetler to be returned to work in August of 2011 with all seniority rights. Mr. Hostetler received $71,000.00 in back pay. He also received all of other benefits under the contract including accrued flex time which amounted to 183.48 hours. Mr. Hostetler is further proof that it pays to belong. 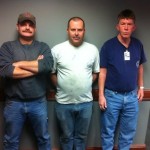 IAM members Todd Fichera, Bill Hollowood, and John Workmeister presenting Congressman Jason Altmire with a MNPL campaign contribution. Congressman Altmire recently voted with labor on all three free trade agreements. With Congress constantly trying to hurt middle class America it is vital that we support our congressman that support us. 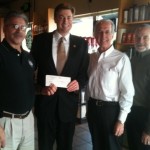 Please note that MNPL donations are NOT from DUES dollars, they are paid from voluntary donations from our members. If you are interested in learning more about the MNPL and/or how to donate you should talk to your Local Lodge officers or your Business Representative, or click here to go to the IAM MNPL page.