Members of District 98’s staff met with Conor Lamb, Democratic candidate for PA’s 18th Congressional District, at the District’s Pittsburgh office on March 1, 2018. At our January meeting in York, the District Delegates voted unanimously to endorse Mr. Lamb for the 18th District in the upcoming special election on March 13, 2018. Mr. Lamb, a strong supporter of Labor, spent time discussing several issues of concern with the Staff of District 98.

The race is very tight, President Trump won this District by 18% in last year’s election. A win by Conor would help turn the tide in the U.S. House. The position became open when the previous Congressman Tim Murphy resigned when a woman he was having an affair with alleged that former Congressman Murphy had asked her to have an abortion. 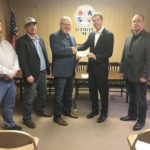