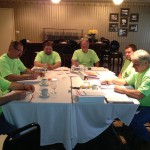 I am pleased to inform you the contract at Joy Global and LL 1842 was overwhelmingly ratified Saturday May 31, 2014. A total of 530 members were eligible to vote and that they did.

This addresses the opportunities and resources provided by our international union. The Local Lodge 1842 committee and I would recommend to all. Even in tough times Solidarity prevails! The members wore the green shirts on Thursdays during negotiations I phrased it as solidarity a sea of green to succeed.

Below is a letter to the Members.

I am pleased to inform you the contract at Joy Global and LL 1842 was overwhelmingly ratified Saturday May 31, 2014. A total of 530 members were eligible to vote and that they did.
As most were aware we were entering into these negotiations with a layoff that occurred approximately 18 months prior to the expiration date of this agreement. We went from 825 IAM members to 425.
We achieved TRA/TAA for our membership in that time period.
So entering into these negotiations the membership had major concerns.
This committee was blessed with the opportunity to attend a negotiation preparation class in January of 2014. From that moment on, the committee seized the knowledge and guidance to rally the membership to attain solidarity. The membership surveys were instrumental. Strategic Resources did a excellent job.
The preparation continued, from that point on, the committee and myself met numerous times. Preparing for this the committee was out of the plant for almost two months, but they have up to 35 stewards that they relied on to TAKE CARE OF BUSINESS, that they did.
From being at William W. Winpisinger Education Center, they implemented a strategic plan.
1. A time table to address and achieve the agenda for that membership they were elected to represent.
2. A negotiations handbook for the membership and a mock negotiation.
The instructors were phenomenal, the classes intense, but these brothers were ready.
The Local purchased shirts of a safety green, which stated TAKIN CARE OF BUSINESS

.
Thursday was Shirt Day so entering into negotiations the first Thursday was a SEA OF GREEN. The shop floor was green from one end to the other at all three plants. As we wore our shirts on those days they knew it was total solidarity!
We worked on Flyers with John Carr. These fliers flooded the shop floors starting every Sunday throughout the negotiations.
We had meeting with the membership during our local meetings, information meetings with the stewards.
The work on the information request that Loren Almeroth and his associates had supplied myself and the committee were unbelievable. As lead negotiator I was able to suppress and challenge every direction they attempted to go.
The items achieved were for the four years, wages $1.05 – $.50 – $.50. – $.50
$1,000.00 ratification bonus
Increases in A&S, Life & ADD, Work boot reimbursement, going from a 18% cost in health care to a 15% cost to membership with modest out of pocket increases.
Retaining a retirement medical savings plan with adjustment, that at the best, gets members up to $9000.00 put into an account from the Company upon retirement.
Increases in 401(k) and matches that increased.
The Defined Pension was Frozen, but with that we achieved $5.00 increase on past service multipliers and $5.00 increase on the multiplier years from 2006 until December 31, 2014.
Language changes that secured the memberships best interest and rights.
With being said on behalf of LL 1842 membership, the Negotiating Committee and myself would like to thank everyone one of you at the William W. Winpisinger Education Center, Grand Lodge, Strategic Resources and Eastern Territory.
Fraternally yours,