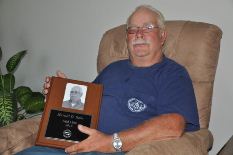 Rohr, a more than 40-year member of the Machinists Union, was nominated by his state AFL-CIO chapter for his many achievements and contributions to the labor movement and working Nebraskans.

Rohr first joined the IAM in 1967 while working for the Hoover Group in Beatrice, NE. As president and chief shop steward of then-IAM Local 543, he was instrumental in the company becoming a High Performance Workplace Organization (HPWO) – an IAM program created to help management and union members work together at every level of operation in order to enhance work relations, performance and productivity. As a member of former IAM Local 543, Rohr participated in several community events and fundraisers, including a walkathon to raise funds for a senior center and the Beatrice Public Library, roadside cleanups, and speaking to students about unions and labor history.

When Hoover left Beatrice in 2008, Local 543 merged with Local 1569 in Seward, NE. Rohr maintained his membership with the IAM. He currently works for the City of Beatrice’s public properties division.

“We sincerely appreciate Harold’s many years of dedication to the Machinists Union and our members,” said IAM Midwest Territory General Vice President Philip J. Gruber. “While he has spent his life working to help others in his workplace, he also worked tirelessly leading and organizing others inside and outside of the labor movement. There could be no better inductee into the Nebraska Labor Leaders Hall of Fame. He is a true trade unionist.”

This site uses Akismet to reduce spam. Learn how your comment data is processed.