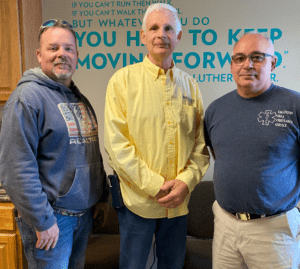 Yesterday, I received a phone call from a very appreciative truck driver and he wanted
to express his sincere thanks and gratitude to two of our employees – Chris Bradybaugh
and Bill Gombos.
These two saved this man’s life!
A few weeks ago we received a delivery. The driver delivers to our facility about once
month. This time, Chris noticed that he “wasn’t himself” and asked Bill Gombos to
come check him out. The bottom number on his blood pressure was 52.
Bill told him, “I can’t make you go to the hospital, but I can’t let you go in the condition
you’re in either.”
The driver agreed to go to the hospital by ambulance. Once he was evaluated at the
local hospital, he was life-flighted to Pittsburgh.
He was diagnosed with an Aortic Aneurysm and had to go under emergency open heart
surgery. They told him he only had a twenty percent chance of coming out of the
surgery alive. Thank God, he did and is doing well.
The doctors told him he had less than 24 hours to live when he was at our plant. Had
Chris not been observant and acted, the outcome would have been different. Had Bill
not had the skillset and the wherewithal to get him additional help, Mr. Author Lewis
would no longer be with us.
Art called to extend his thankfulness and wanted these men recognized. I know both
gentlemen and get an ear-full from both of them for typing up this memo. They do not
want or expect recognition. They were just doing the right thing.
A great example – we need to watch out for one another. Thank you for the lesson Chris
and Bill.